How I Got My Degree at WebMD

Doctors will caution you not to self diagnose via the internet.  I disagree.  Without the access to WebMD, I never would have been able to diagnose myself with Ankylosing Spondylitis in record time.


I was living the very active life of a traveling event manager.  I slept on airplanes, ate overpriced room service, and managed motorsports Opening Ceremonies nearly twenty weekends per year. 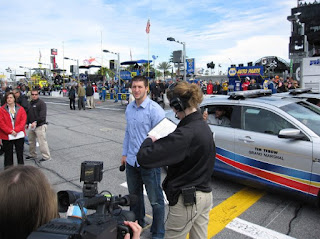 
During a night at home, I woke up in the middle of the night with a sore eye.  It felt like it was maybe a scratch.  It was very sensitive to light.  When I say very sensitive, I mean it was painful to look at my digital alarm clock in the dark room.  I was even sensitive to the brightness when my eyes were closed.  I managed to sleep the remainder of the night, but woke up the next morning with an extremely red eye.  I didn't have an eye doctor at the time (I was slacking on making appointments in the past three years that I had lived in Charlotte.  I have perfect vision thanks to LASIK).


I made an appointment with an optometrist near my house.  I was then referred to an ophthalmologist.  This doctor diagnosed me with uveitis which is an inflammation to the muscle in the eye.  He prescribed steroid eye drops and dilating eye drops for several weeks of treatment.  The treatment was mostly painless, but the ophthalmologist wanted to put me through several rounds of tests to see what might have contributed to the uveitis.


I was tested for what felt like everything possible.  Chicken Pox and Shingles, various STDs, and so much more.  One test the doctor ran came back positive.  It was for the gene HLA-B27.  I believe my response was, "What exactly is that??"  He explained that it was a genetic marker that often led to inflammatory issues within the body and I might have problems later on in life.


I did what any good person would do.  I came home and immediately Googled HLA-B27.  I found that what he said was 100% accurate and that this gene often led to diagnoses of Crohn's, Irritable Bowel Syndrome, Uveitis (hey, that's me!), Psoriatic Arthritis, and Ankylosing Spondylitis.  I had to do some research on that last one, but it turns out it was a type of arthritis that typically affects younger people. 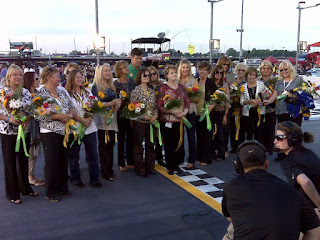 Moments before the drivers' mom said
"Drivers, Start Your Engines"


I was still living the glamorous (sometimes not so glamorous) life of a traveling event manager.  I woke up the morning of October 3rd feeling like an 80 year old woman, though.  My back was so stiff that I couldn't bend it.  I sort of had to roll out of bed.  I took two ibuprofen and went on to work. For the next two weeks, I continued to have back pain off and on.  Something also just felt off in my body.  I can't explain how I felt, but I didn't feel like I normally did.  I decided to see a Primary Care Physician.  (Guess what?  I didn't have one of those either.)  Again, I found an office by my house and made an appointment to see a lady who looked nice in her picture on their website.


I was able to get in about two days after I requested the appointment.  I sat down with the doctor and explained my symptoms.  I then added, "I also thought I should let you know that I have the HLA-B27 gene and I might have Ankylosing Spondylitis."  She turned her head to the side and looked up at the ceiling like she was trying to do math in her head.  After a brief pause, she said "I remember that from Medical School."


I underwent a few tests that revealed a bulging disc in my back.  For the next two months, I began treatment with pain medication and physical therapy.  It was possibly helping, but definitely not fixing the problem.  I began seeing a physiatrist which in layman's terms is a doctor that treats general pain and works on a rehabilitation plan.  I told him my HLA-B27 theory, but he was focused on treating the bulging disc.


My pain was continuing and I had developed the new symptom of swollen/inflamed ankles.  They were so inflamed that I could not bend them.  I was walking with a limp.  I would have to stretch them out multiple times a day to help with mobility.  I recall how challenging it was to stand up after a seat position.  When your back is in pain and your ankles won't budge, you become a bit limited.  Admittedly, I felt quite defeated.


I didn't stay defeated for too long.  Something was wrong with my body and it was up to me to make them find it.  I called the primary care physician's office back and said "I know you all think I am crazy, but something is wrong.  I really think I have this disease and I need to come back in."


They scheduled an appointment the following morning (score one point for this crazy bitch).  The doctor came in the exam room and said "I've been talking to a colleague about you.  There may be something to this gene."  She ran a full set of blood work.  I've honestly never seen that many vials of blood come out of a person.  She also called and got me an appointment with a Rheumatologist for the following week.  (Typical wait time is over a month.  That brings my score to two).


On this date, I met Dr. Elnaz Tabrizi.  She spent one hour with me in the exam room.  I told her about every bodily function from the past three months.  She listened and asked additional questions.  Dr. Tabrizi sent me for additional testing (I was pretty sure I had no blood left to give, but they took more).  I also was sent for more x-rays and MRIs.  This time they focused on the sacroiliac joints.  They are located below the waist and connect your pelvis to your spine.  An area commonly affected by Ankylosing Spondylitis in the early stages.


The next day I was home from work.  All that blood work had revealed I had mono (as if I didn't have enough going on already).  I received a phone call mid-day from Dr. Tabrizi.  She gave me the news I had been waiting to hear for over three months.  I had erosion of my sacroiliac joints that is a telling sign of spondylitis.  The first words out of my mouth were "So, I'm not crazy?!".


The average time on diagnosis of Ankylosing Spondylitis is five years.  I managed to get mine in roughly three months.  Let me rephrase that, I fought hard to get mine in roughly three months.  The internet is full of opinions and misinformation.  However, there are some really good websites out there.  Web MD is a trusted source.  The Mayo Clinic is also good for health problems.  There are plenty of sights catered to specific diseases, too.  You just have to be careful not to get caught up in the comments section.


I can't preach this enough...you have to stand up for yourself.  There is absolutely no reason to accept the initial diagnosis a doctor gives you if the treatment isn't fixing your problem.  You know your body better than anyone else ever will.  Before you go to the doctor's office, I encourage you to do your research.  Look into the possible causes, diagnoses, and treatments.  You will thank yourself later. 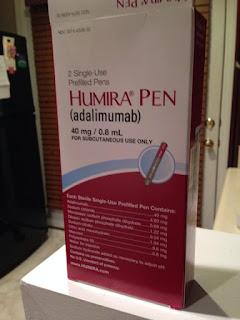 
Posted by Naively Confident at 2:14 PM