Let's face it.  2016 had some ugly moments.  For just a moment, though, I want to focus on the lighter side of life and provide a list of my favorite things from this year.

Best New TV Show...This Is Us
I was hooked from the very first episode.  The writing is phenomenal.  To be able to show the viewer the past and present of characters within each episode is a new approach that works surprisingly well.  The casting is great, too.  I especially love how all of the younger versions of Kate, Kevin, and Randall look and act like their grown up versions. 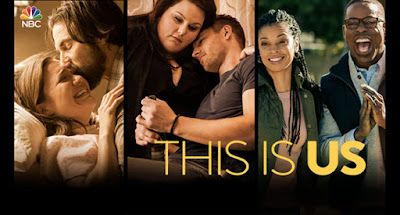 Best Fashion Trend...Less Skinny Jeans
Skinny jeans were in style so long that mom jeans even had a tapered leg.  We're finally seeing boot cut as the preferred option again and even a few wide leg pant styles.  My chicken legs thank you for the change. 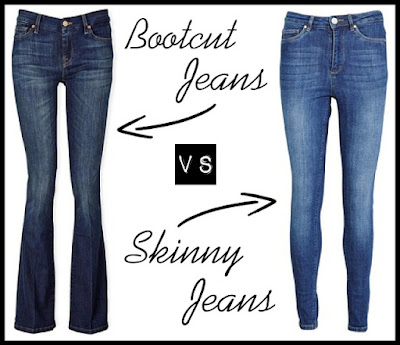 Best New Album...Beyoncé "Lemonade"Holy hell...Bey ain't messing around.  She came back with a vengeance on this album (and stole the Super Bowl half time show without even trying).  Maybe she's making the most of the tabloid headlines, but some great songs came out of it.  We've seen her collaborate before, but "Don't Hurt Yourself" featuring Jack White was an unexpected direction. 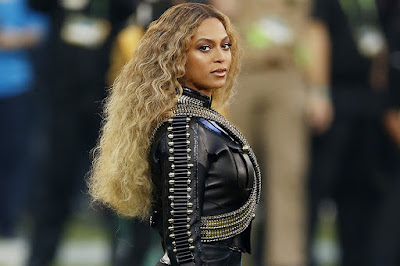 Best Make Up Product...Eye Lid Primer
At first, I thought that make up companies were just trying to take our money by making a primer for every part of your face.  Eye lid primer, though, really makes a difference.  I can now work a ten hour day and still have eye shadow on my lids...as opposed to running down my cheeks, in the creases, or the oh so familiar vanishing act. 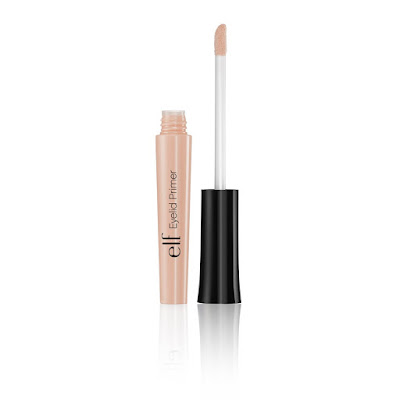 Best Comeback...Michael Phelps
He has always been a beast, but something was off in 2012.  The personal struggles mimicked those that we saw in the pool.  Flash forward to the 2016 Rio Olympics where he dominated and showed growth as a man, father, and soon to be husband.  He says he is retiring, so luckily we always have this image to remember him by. 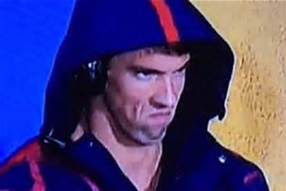 Best Instagram Account...Women IRL
Sometimes I prefer a motivational quote or a cat video, but Women IRL is just so real (which is good because IRL stands for In Real Life).  It is nice to see that so many other women are comfortable with sharing the not so perfect side of life. 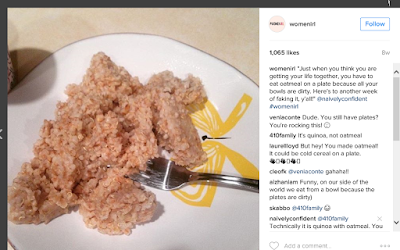 Best Response to Tabloid Trash...Jennifer Aniston
After years and years of being judged for...well, everything, Jennifer Aniston finally spoke out to the Huffington Post.  Here is a link to her inspirational For the Record contribution. 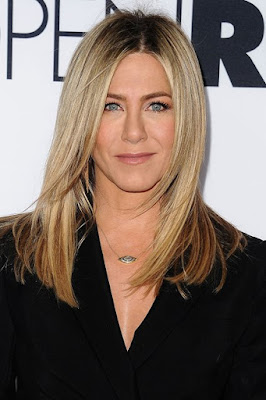 Best Quote...When They Go Low, We Go High
I will admit it.  I could have used this quote about ten years ago.  It is so easy to fight back with even more toxic words when someone comes at you with some trash.  Thank you to Michelle Obama for giving me this guideline which now helps me when I read the daily trash...a.k.a. Facebook political opinions. 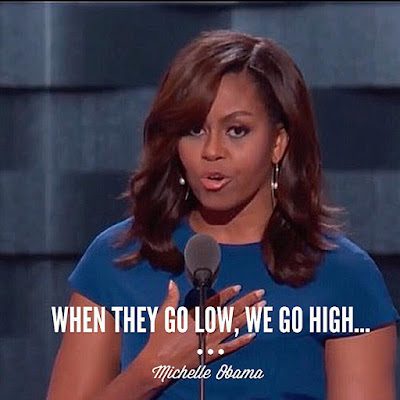 ﻿
So, here's to you, 2016.  You have taught us a lot and also shown us we have even more to learn.  Here's hoping that 2017 is full of laughter, more open-mindedness, and reasons to celebrate life.


Posted by Naively Confident at 10:29 AM No comments:

I recently bought a lobster tail with no clear intention of how I would prepare it.  Lobster seems so fancy, but would that mean it was challenging to prepare? 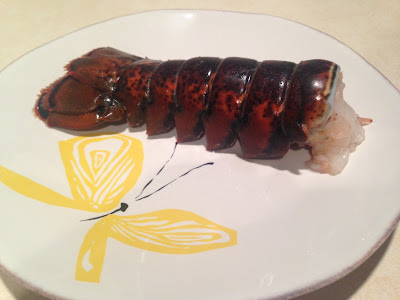 The answer is no.  I did a quick Pinterest search for lobster recipes (can we all agree Pinterest is the greatest thing on the internet?) and was reminded of how much I love Lobster Mac and Cheese.  Since I didn't have the exact ingredients on hand for any of the recipes I found, I simply used a Pioneer Woman recipe as inspiration.
I'm calling my version She's Your Lobster Mac & Cheese as a tribute to the TV Show Friends.  Here's a video for reference:

I seriously loved Friends, but anyway, back to the recipe...

Directions:
1. Add your uncooked pasta to boiling water.  However, don't cook to al dente as you normally would.  You'll want it to be a little undercooked since the pasta will be baked as well.  I boiled my pasta for 5 minutes, drained, and set aside. 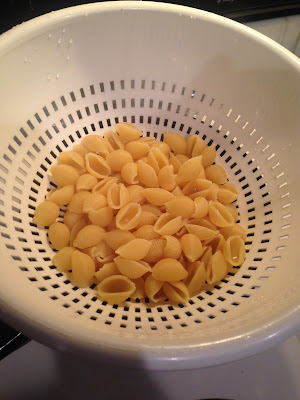 2. Melt 2 Tbsp of butter in a skillet over medium-high heat.  As it melts down, add the lobster chunks.  Side note from me - breaking the lobster meat out of the shell was kinda gross.  I did it by hand, but I think scissors are the correct method.
3. You should only cook the lobster for 1 minute and then set aside.  Similar to shrimp, lobster doesn't take long to prepare.  Plus, you are going to bake the lobster as well. 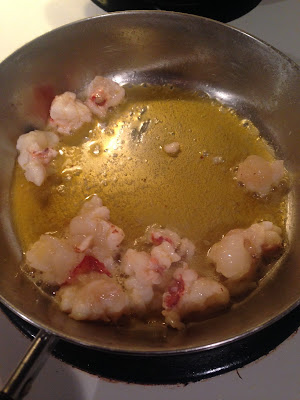 4. Speaking of baking, go ahead and pre-heat your oven to 350 degrees at this point.
5. Add the remaining 2 Tbsp of butter to the skillet.  Slowly add in the flour and whisk to combine.  You are making your roux which is one of my favorite cooking words.  It is just fancy for thickening. 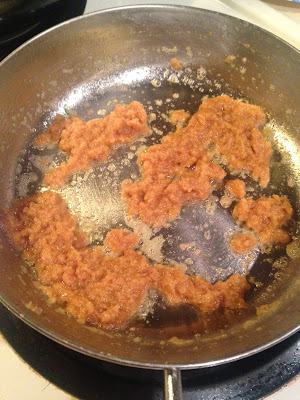 6. After about one minute, add the milk and continue to whisk.  The sauce will bubble and you need to stay focused on whisking it for about three minutes so it doesn't stick to the skillet or get chunky.
7. Add your salt and pepper to taste.
8. Add your cheeses and stir to combine.  You should have a beautiful, bubbly creation at this point.
9. Add the lobster and pasta to your skillet and stir so that the sauce covers everything. 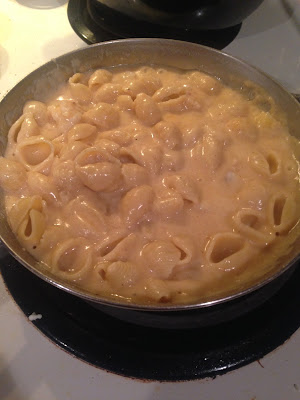 10. Pour the mixture into a baking dish and top with a little bit more Parmesan.  Bread crumbs would be tasty here, too!
11.  Bake for 20 minutes. 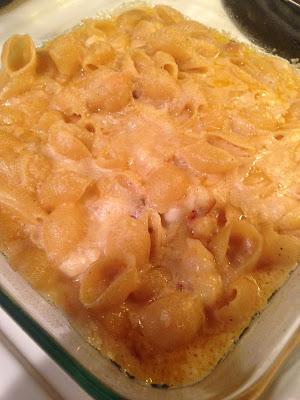 I was very pleased with how my recipe turned out.  So tasty and comparable to the restaurant varieties I've tried before.  I paired it with broccoli to try to balance out all the carbs and dairy.  I'm excited I finally cooked lobster.  What should I try next? 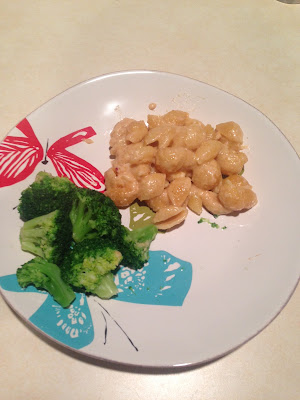 Posted by Naively Confident at 12:05 PM No comments: