Catching up with Friends at Lily Bean Coffee 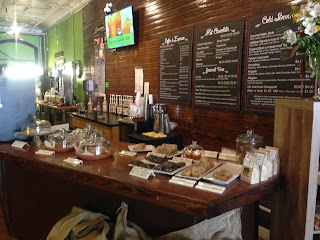 With so many restaurants, bars, and coffee shops in Uptown Charlotte, you rarely have to look outside of Center City to find a place to dine.  I recently decided to take a day trip to Charlotte’s neighbor to the west, Shelby, to expand my knowledge of some of North Carolina’s small businesses.


The focus of my visit was on Lily Bean Coffee.  I became aware of Lily Bean through a high school classmate, Meghan Stout, who just so happens to own the shop with her husband, Chad.  Maybe that makes me a little biased, but I was impressed the moment I walked in.


Lily Bean Coffee is located at 108 East Warren Street in the heart of Uptown Shelby.  Who knew that a city other than Charlotte referred to their downtown as Uptown?  While I love our city, I was pleasantly surprised by being able to park on the street for free while I checked out the coffee shop in Shelby.


As I entered the shop, I noticed that they had a large crowd for a Saturday morning.  While some customers were settled in to booths, there were also a few at the register deciding on their purchase.  The green walls were decorated with artwork created by local artists.  The art can be purchased at the shop and pricing is listed discreetly beneath each creation.


The furniture throughout the shop varies from soft seating to high top cocktail tables.  While this Saturday morning had a laidback lounge vibe, the space could also be utilized for a small business meeting or job interview. 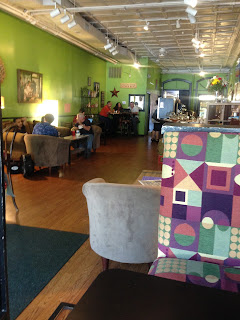 
My latte was prepared at the perfect temperature to consume immediately.  None of that waiting around and blowing on it to get lower than the temperature of the sun.  I must add, though, that it remained warm through consumption and didn’t cool off to a point where it lost its appeal.


While enjoying my coffee with Meghan, several customers stopped by to say hello on their way in or goodbye on their way out.  I definitely got the feeling that they see a lot of regulars.  It was like the bar where everyone knows your name.


Since I know Meghan has a degree in Communications and holds a full time job in Marketing and Advertising (in addition to a few part time gigs), I had to ask “Why did you and your husband decide to open a coffee shop?”  Her answer may surprise you.  She said she gained interest after searching the internet on how to brew coffee beans.


She started doing the research and experimentation on her own.  Admittedly, some of the first batches weren’t perfect, but the interest was there and she kept trying it.  As her roasting technique improved, she decide to take the plunge and open a coffee shop with her husband.


They made the decision to open a coffee shop at the beginning of the week and took ownership of an existing space by the end of the week.  That monumental week was nearly five years ago.  They are now in a larger space (the previously mentioned 108 East Warren Street) and have recently expanded to a second location.  This second location is drive thru only in Midtown Shelby at 711 East Marion Street.


If coffee isn’t a part of your daily routine, you might also be interested in the fact that Lily Bean Coffee occasionally partners with Newgrass Brewing Company.  Newgrass is another small North Carolina business located in Shelby.  They are just around the corner from Lily Bean at 213 South Lafayette Street.  The close proximity makes for the perfect partnership.  While the brewery’s selection often rotates, you can likely find the Lily Bean Golden “Stout” on the menu.  This golden beer is infused with cold coffee extract from Lily Bean as well as cocoa and vanilla flavors.  While it may not have the typical coloring of a stout, the name just made sense based on the coffee shop owners’ last name. 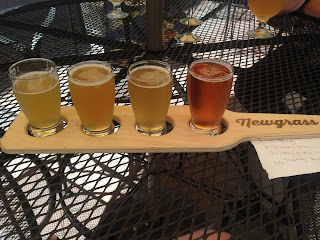 My time in Uptown Shelby was well spent.  Not only did I get to see a classmate that I haven’t seen in over ten years, I was able to experience their laidback culture and dining.  When you live in Charlotte and need your coffee fix fast, you’ll likely go to the closest shop.  However, if you find yourself in Shelby, stop by Uptown or drive through Midtown for the local flavor of Lily Bean.
Posted by Naively Confident at 4:55 PM